Nationwide, the best time to list a home for sale is a Thursday during the second half of April. Homes listed during those weeks can expect to fetch 2.8% more on the typical Canadin home. And homes listed on any Thursday, when shoppers are planning for weekend showings, sell for even more.

For decades, home sales have trended upward in the spring and summer and dwindled in the colder months. The 2020 home shopping season was greatly disrupted by the COVID pandemic – witnessing an atypical drop in inventory and sales. By midsummer, the market was once again humming along and the momentum continued through much of the winter, leaving some uncertainty as to whether seasonality was a thing of the past. The months since have shown that homes are selling fast regardless of season, but the time of year you list your home can have a big impact on the sale price — and we are approaching the ideal time in much of the country.

Nationally in 2021, homes listed in late April sold for a larger premium than homes sold any other time of the year. Knowing the best time to list has gotten more important as home values have risen to new heights.

Listing in the spring months – March through May – is the best time for sellers in most larger cities in Canada to get the highest price for their home, if 2021 trends hold.

Homes throughout 2021 sold so fast there was hardly any benefit for listing at one time of year over another. Midwinter through April were when homes typically went pending fastest, though it was only about one day on average faster than the typical pending time throughout the year. This is a much smaller benefit compared to 2019 when homes benefited from about a three day faster sale if they were listed in April and early May than the annual average.

When it comes to the number of eyes on your listing, early April may be best. In 2021, listings in early April received the highest rate of daily page views compared to any time of year — nearly a third more views daily than the annual average. Home listings in early November received less attention than any other time of the year, and homes listed later that month sold at the biggest discount. 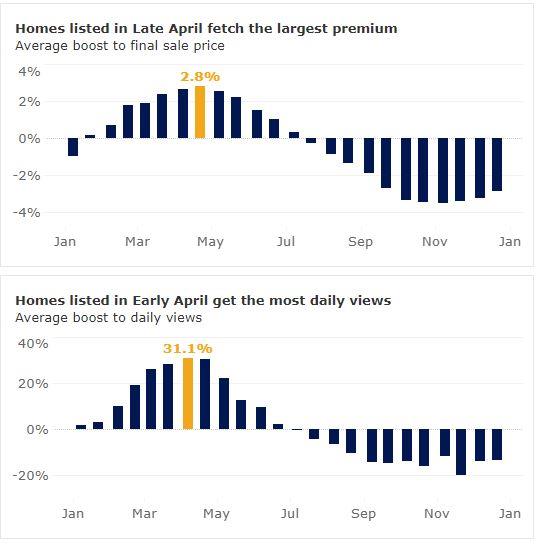